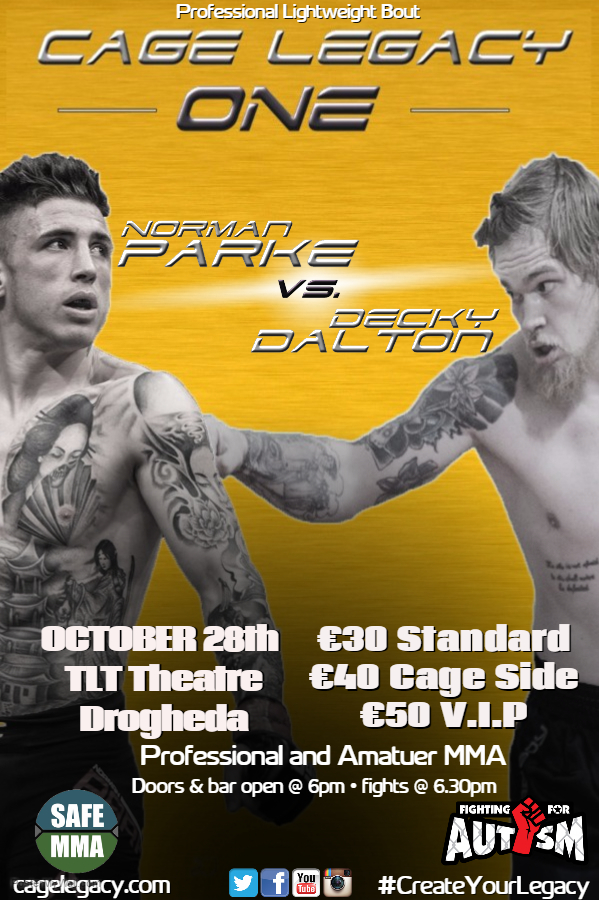 Two of the biggest names to ever grace our shore have already been throwing jabs at each other via social media ever since Dalton called out a number of MMA stars:

Parke (21-5-1) replied swiftly and would accept any challenge.

No disrespect but this is an easy fight, he would be retired for the 10th time then. https://t.co/7OUN0eJ8Em

“Does this smell like an excuse or what? Norman needs easy win to get back into UFC where he done fa anyway.. Still won’t take an “easy win”.. Well here’s my opinion.. Norman’s judo is shite.. His kicks are shite, his boxing is worse.. And I believe I would knock his fucking Ballix in with time to spare!! Don’t play games Norm… Are u fighting or what?”

Both Parke and Dalton are vying for each other, and their opportunity to clash arose with Cage Legacy’s maiden show in the TLT in drogheda; Cage Legacy FC 1! The show includes three announced bouts and a surprise professional as yet to be announced with up and coming amateurs added to mix.

A night of top class fighting that cannot be missed for fighting fans.